Serving the North Since 1970

The Crisis Prevention, Intervention and Information Centre for Northern BC provides peer support for the people of northern BC. Coverage is from the Alberta border in the east to Haida Gwaii in the west, from Quesnel in the south to the Yukon border to the north.

If you live outside of our service area and are in need of a crisis line's services, please refer to the table "List of BC Crisis Lines" to find the crisis line closest to you. 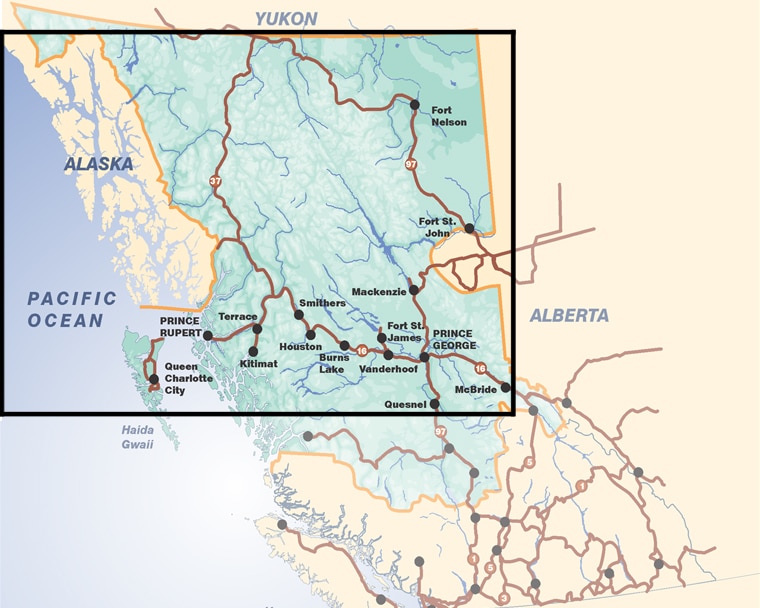 History of the Crisis Centre for Northern BC

The Crisis Centre for Northern BC is a volunteer based non-profit society that has been in operation in Prince George since 1970. Our phone-line services are available 24 hours a day, seven days a week to those in crisis. What we define as a "crisis" is any emotionally significant event or moment of risk in a person's life. It is the caller who decides what a crisis is - we listen to and support all callers in any situation without labelling them. Each caller is guaranteed confidential, non-judgmental, quality service. Our crisis line workers, of whom a large majority are volunteers, receive over 70 hours of intensive training designed to help people help themselves. We want to ensure that callers are aware of all options that are open to them and we aim to empower our callers to work through or find a resolution to their crisis. The Crisis Centre for Northern BC is also a major community resource service - for anyone requiring information about community facilities or services, we have over 2000 resource listings on major social services, self-help and support groups, health organizations, fraternal service groups, youth groups and activities, emergency services and more. These resources are available through our phone line services and in print via our Community Resource Directory which is updated periodically.

The organization began humbly on May 1, 1970 as the Prince George Crisis Intervention Society. Through municipal funding, service was expanded to five neighbouring communities throughout the 1980s. The exciting addition of a new line - the Youth Support Line - was made in 1987 with thanks to MCFD and the Shriners. In 1997 the service area was again expanded to include north-eastern BC and Queen Charlotte Islands (Haida Gwaii) through funding from Skeena Health and the first publication of the Community Resource Directory was made. Five years later, in 2002, the newly-titled Crisis Prevention, Intervention and Information Centre for Northern BC was able to boast accreditation by the American Association of Suicidology. Quickly following this accreditation, the organization joined the Crisis Line Association of British Columbia in 2004 and incorporated another new line into its repertoire: the province-wide 1-800-SUICIDE line. In 2008 the Crisis Centre had grown so much it took over coverage from the Fraser Lake Crisis Centre and again expanded its own service area to the Peace-Liard region. Services targeted toward youth were further developed in 2009 with the addition of an online crisis chat platform, Northern Youth Online. Ties with the Northern Health Authority were strengthened in 2011 with the signing of a Memorandum of Agreement for caller follow-up and referrals. In late 2013 and early 2014, efforts to increase public awareness and education around suicide were stepped up when senior staff members became trained Living Works facilitators, making workshops such as ASIST (Applied Suicide Intervention Skills Training) available to the public and various agencies. Again working with the Crisis Line Association of BC, the Crisis Centre picked up another province-wide line, 310-MENTALHEALTH, in 2015. The following year, texting services were added to Northern Youth Online. In 2019 the Centre partnered with Crisis Services Canada, along with many other organizations, to provide Talk Suicide - Canada's first national suicide prevention line.

This brings us to today - the Crisis Centre for Northern BC now serves all of Northern BC from Quesnel in the south to the Yukon border in the north and from Haida Gwaii in the west to the Alberta border in the east. Our Centre answers over 11,000 calls locally and over 7,000 nationally per year, of which more than 70% are calls from people in crisis. We are the suicide intervention and prevention experts in Northern BC. None of this would be possible without the many volunteers who have given their time to this organization and our generous funders. Looking to the future, the Crisis Centre will continue expanding and improving services to make every community in Northern BC a suicide-safer community while maintaining reliable, quality, 24 hour crisis line availability.

Get Help
FAQs About Suicide
Worried About Someone?